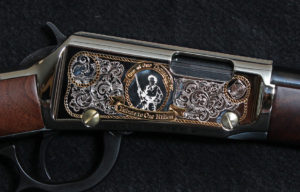 High Caliber Gifts is proud to announce the release of  a new Henry Tribute Rifle in the Tribute to One Million Series.  This special edition engraved One of One Thousand edition features intricate details in the engraving along with a premium walnut stock.  This tribute rifle is sure to be a fine addition to your collection.

As he watched Henry collectors bid the historic lever action past $25,00.00, then beyond $40,000 and then past $50,000.00, Henry President Anthony Imperato was proud—but he also felt challenged. As the auctioneer’s gavel hammered the final bid of $55,025, Anthony wanted to find a way for more Henry fans to own a part of this special time in the history of Henry.  His answer is this superbly engraved “One of One Thousand” Edition.

“Everyone at Henry Repeating Arms was proud of achieving the production milestone of the 1,000,000th model H001 Henry lever action rifle. We are equally proud of this “One of One Thousand” tribute”, proclaimed Henry Repeating Arms President, Anthony Imperato. “I believe this is one of the finest special editions we have ever manufactured.”

“From the  gold  renditions of the Henry logo and the “Made in America of Not Made at All” inscriptions to the intricate scroll and rope pattern engraving and the presentation grade walnut stock, few details were spared in the production of this “One of One Thousand” tribute,” Imperato said.

The 1,000,000th H001 was the first produced with a silver finish receiver and that special feature has been continued on the “One of One Thousand” tribute. This silver finish perfectly highlights the intricate scroll patterns and the inlayed 24-carat gold.

“One of One Thousand” and “Tribute to One Million” inscriptions are inscribed in 24-carat gold on the right side of the receiver cover above and below a prominent Henry logo.

The right side of the receiver also features full-coverage scroll engraving and 24-carat gold roping around the receiver and the Henry logo.

All “One of One Thousand” rifles are fitted with hand-selected Premium Walnut, normally a $250.00 Henry additional charge.  Learn more here!